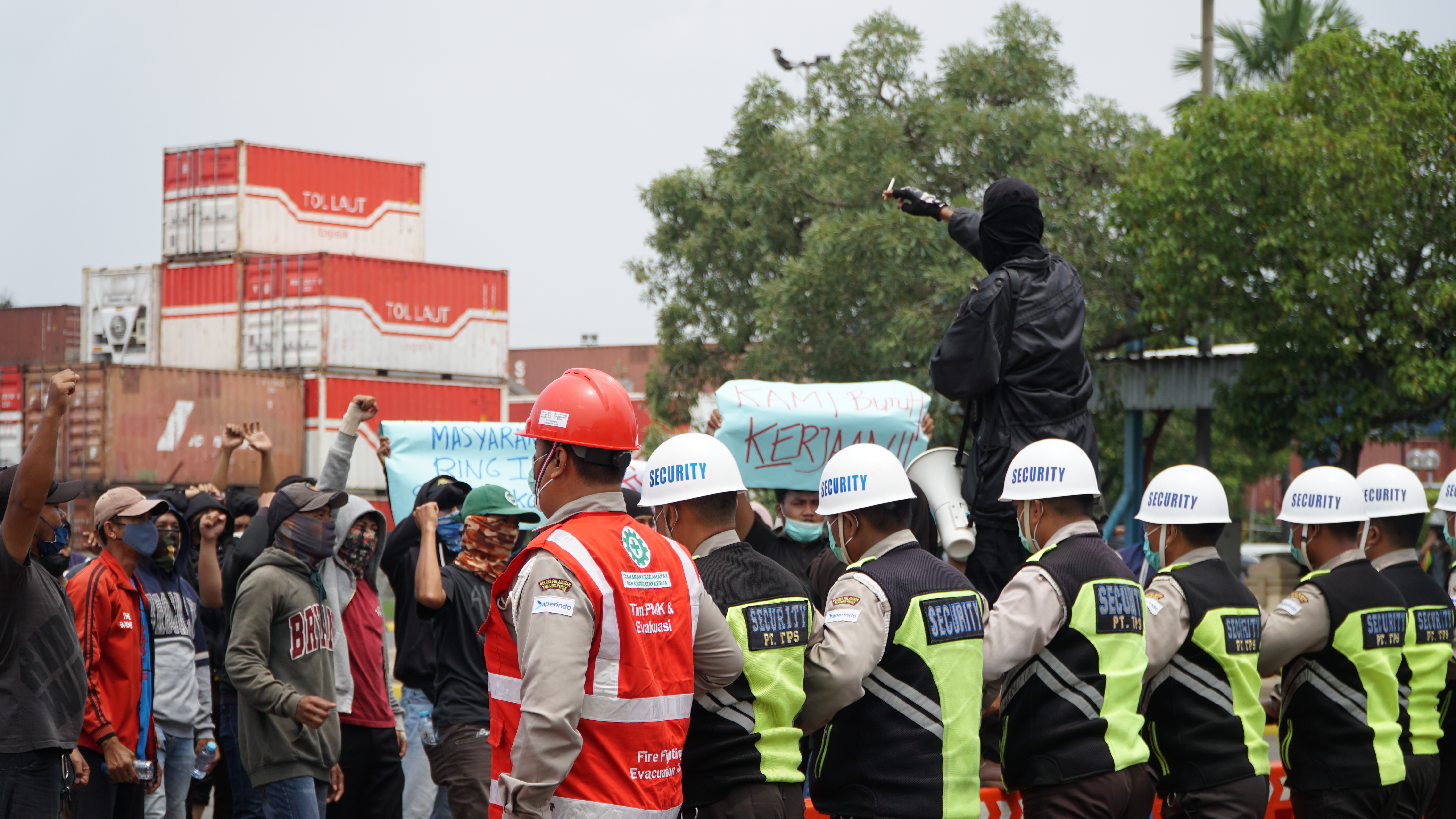 GUARANTEE SECURITY AT THE PORT, TPS HAS EXERCISE ISPS CODE

Surabaya – Thursday (31/3), in the courtyard of the Surabaya Container Terminal (TPS), a group of masses held a demonstration, demanding that local residents be employed at the TPS. The atmosphere was tense, because the demonstrators acted anarchically by burning tires. There were clashes and push-and-shoulder actions between a group of mobs and security officers, the masses even managed to infiltrate a limited area of the TPS, and even the mob almost controlled the port, so that the security level increased to level 3 and operational activities had to be stopped.

Luckily the security officers swiftly controlled the situation. In a short time, after comprehensive coordination between internal TPS and relevant stakeholders, the threat was successfully handled by securing the provocateurs, so that operational activities could return to normal.

The mass action turned out to be a scenario from the International Ship and Port Security (ISPS) Code exercise held by TPS. TPS is the first container terminal in Indonesia that has consistently implemented the ISPS code on ships and port facilities, since December 2004. Ports that comply with the ISPS Code are required to carry out an ISPS Code exercise, at least once a year. Exercise is carried out to identify and re-evaluate the readiness of personnel in dealing with and overcoming threats at the Port.

The ISPS code is a comprehensive rule that regulates security procedures for ships and port facilities and is part of the international convention for the safety of life at sea (SOLAS). This rule also specifically regulates the activities and steps that must be taken by each country in tackling the threat of terrorism at sea.

TPS Corporate Secretary, Erika A. Palupi said that this exercise was aimed at increasing the synergy between TPS and stakeholders, related to the management of securing ships and port facilities according to the ISPS Code standard.

With the implementation of this ISPS Code exercise, it is hoped that Security Officers at TPS will have the ability to manage risks, especially in dealing with all possible threats, both to ships and port facilities at TPS, to be able to coordinate with related parties, determine the level of regional security and take steps. - the necessary security measures in accordance with the procedures established by the ISPS Code.

"The success of today's ISPS Code exercise so that TPS is again declared compliant with the ISPS Code, of course, cannot be separated from the participation of related parties, for that we on behalf of TPS Management would like to thank you profusely for your support and cooperation, because it is the responsibility of the TPS. We are together, all elements at Tanjung Perak Port, to ensure safe conditions at Tanjung Perak Port,” said Erika.