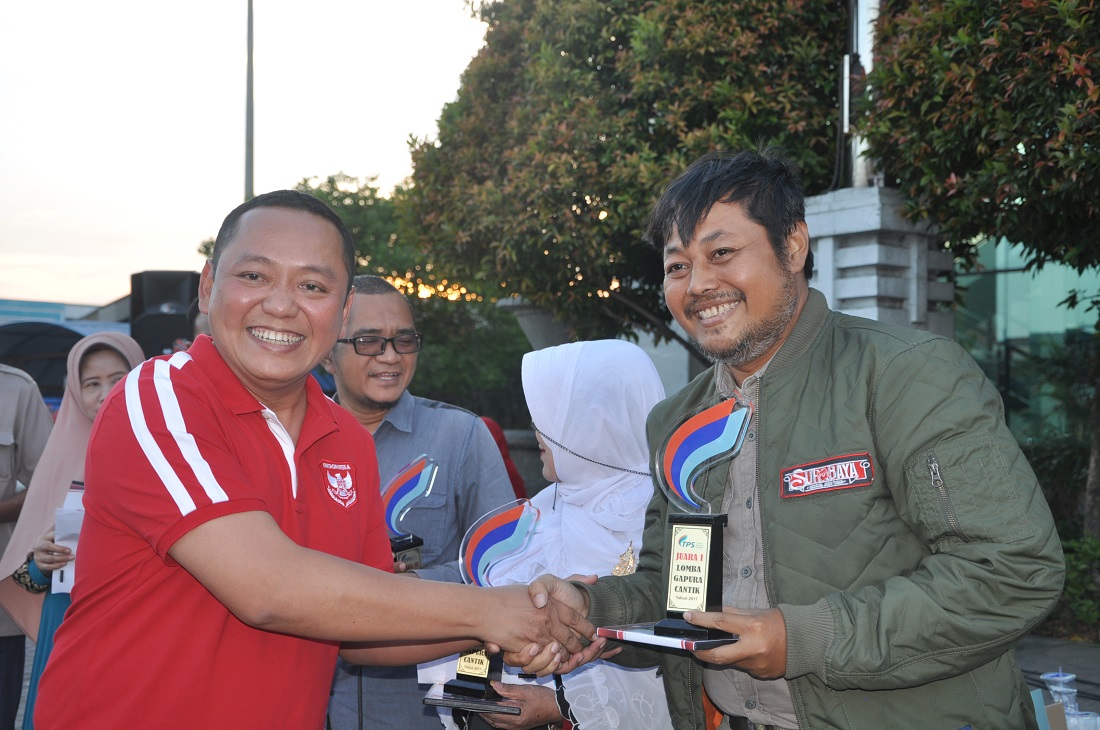 Society often decorate the gate to celebrate the anniversary of Indonesian independence day. Even the gate garnish made from start to villages up in the villages or big cities. The gate is decorated as attractive as possible. Some use a series of bamboo or large eagle, there are also standard with a form of order frames. Obviously, ornate red and white as the color of pride when independence seemed in arches made in the creative hands of citizens.

It has become an annual event around Tanjung Perak Surabaya, the gate is contested to win cash prizes total up to tens of millions of rupiah and trophy PT Terminal Container Surabaya (TPS). Competition ornamental gate this time followed by 15 RT in the neighborhood of Pabean Catikan Urban Village, Tanjung Perak Surabaya, East Java.

Terms and conditions for the listed village in the race to become champion ornamental gate that is interesting, there are elements of the 72nd Anniversary logo image RI and TPS, gate design, lighting, materials used and do not miss the greening around the gate should also be beautiful.

"The program and the event is a spirit and shape our appreciation to the surrounding community. Together we share the happiness of citizens in celebrating Independence and also grateful to the heroes who have fallen and as usual, the RT residents who list in the gate are very enthusiastically shown when the judges judged to the location was greeted with various entertainment where the citizens of skill performance by singing to make drama of struggle around the gate to be interesting, "said M. Solech, Public Relations TPS.

"Thank God this year TPS is still holding a gate event, because learning from last year we did not win, then referring to last year's winner we have more leverage in decorating the gate and we meu favor our toga plants around the gate where the plant is the result of hard work along with residents who take turns taking care of dozens of toga trees, "explained Poerwoko, one of the residents who RT participate in the ornamental gate.

Met on the sidelines of judging, Tri Sukoyono, Lurah Perak Utara who also serves as the jury welcomes the event. According to him, this kind of activity can increase the harmony between the people because they gotong royong work together to decorate the gate, contributing creative ideas and the people in hand to make the best creations to be the winner.

The announcement of the winners and prizes to the winners was handed over directly by Yon Irawan, President Director of PT TPS accompanied by Directors and Head of North Perak Village at Administration Building of PT TPS on Friday (25/8), together with competitions between TPS officers in order to commemorate the anniversary the 72nd Republic of Indonesia. "Congratulations to the winners, hopefully by becoming a winner the citizens can be more creative and innovative to maintain beauty and beauty in the environment where he lived, and hopefully reforestation can be further encouraged to see the condition of air pollution is getting higher. If in TPS in order to reduce air pollution we have changed 11 Container Crane units at international docks from diesel generators to electrical power to reduce air pollution levels. "Close Yon.

Solech grateful for the initiative and enthusiasm of RT who have participated in the race gate TPS in 2017, hopefully in the next year TPS may organize similar activities but with more participants because just by signing up and participating in the race ornamental arches, each RT that participated will be given funding of facilities and infrastructure amounting to Rp 500.000,-.